If used reasonably and correctly, social media do contribute positively to people’s everyday social life. Businesses also get a lot of leverage from social media as they try to keep their brand visible to a wider audience. The negative effects of social media use rear its ugly head when it becomes excessive and obsessive. If you can’t imagine your life without social media, that’s a sure sign that you’ve fallen a victim to the addicting power of social media. This can also mean that you might have experienced one or more of the negative effects (both physical and mental) of using social media.

According to Research from California State University, excessive use of social media may be connected to the following psychiatric problems.

Before the onset of social media, bullying was something only done face-to-face. Now more than ever, it is easy for anybody to bully somebody online anonymously. Social media has made meeting and connecting with people easier, it has also made it easier for online bullies to find victims. Being anonymous on social networking sites has been used as a weapon to gain people’s trust and intimidate them in front of their peers. Online bullying poses a major risk factor for issues including mental health and social relationships. These online attacks often leave long-lasting effects and deep mental scars and even drive people to suicide in some cases. If you become a victim of cyberbullying, it’s important to know that you are not alone. Seek help and take steps in order to get back your dignity.

Spending too much time on social media could negatively affect your daily mood and disposition. Research suggests that people who spend more than two hours a day on social sites are susceptible to poor mental health as well as psychological distress including symptoms of anxiety and depression. In order to avoid such undesirable consequences, the same research suggests spending half an hour a day on social media. As with most things in life, moderation (and common sense) is key.

On top of increased rates of anxiety and depression, various researches have also shown that increased social media use has a negative effect with a sleep quality. Using electronic devices like phones, laptops, tablet and television at night before you go to sleep is linked with difficulty sleeping and can lead to poor sleep. If you feel like social media use has been affecting your productivity and your sleeping patterns have become, try and avoid spending a significant amount of time on social media. 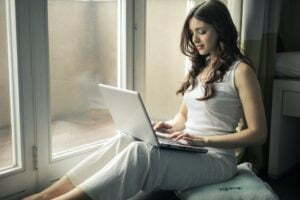 Body image can be issue for many people, both male and female (and especially young people). Many studies have found out that when young women (teens and early twenties) use social networking sites (Facebook, Instagram etc.) even for only a short time, body image concerns become higher compared to non-users. If you look at some popular social networking accounts, you’ll most likely find beautiful people wearing expensive clothes on their perfect bodies. Seeing those perfect (and almost unattainable) standards in accordance with “normal” people on a daily basis makes you conscious about how different you look from those pictures.

Normally, your daily interaction with other people is only limited to a few number. When you share your daily life online on social media, the number of people able to see what you post becomes (almost) unlimited. The danger lies when the wrong set of people are able to see what you share and form the wrong impression of you. Oversharing also becomes an issue when you post photos and ideas and people you wouldn’t normally share it with see them. These may prove fatal for your personal relationships with people close to you, and even those that aren’t.

Fear of Missing Out (FOMO)

Fear of Missing Out can be described as a form of anxiety that stems from the feeling of missing out on positive experience or emotions that someone else (you have seen on social media) is getting. The more you use social media, the more likely you are to see someone you know having great experiences than what you are experiencing at the moment. This is one of the most common negative effect of social media use, and is constantly fueled by your engagement in social networking sites.

People spending too much time interacting online may put more weight on their virtual relationships than their real ones. By spending more time on social media, they often overlook the importance and appropriate behavior related to face-t—face personal contact. For younger people, their set of interpersonal skills that are necessary for them to thrive in real life may not develop properly.

Social media use is more often than not described as being more addictive compared to alcohol and cigarettes. Spending too much time on social networking sites not only pose negative effects on you physically but also mentally. It’s not necessary to all together quit using these social media sites. There are certainly some positive side to social media but as with most things in life, moderation is essential.

Amino Neuro Frequency therapy has become one the best therapeutic techniques and pain therapy for normalizing several medical and psychological problems including stress. Your ANF therapist will examine your body thoroughly to recognize the impacts of the stress on your body and the areas affected by inflammation.

Afterward, ANF discs will be placed on those regions of your body that are affected by the stress. This is to correct the weak or damaged nerve frequencies, which are the main cause of your stress, and to normalize any inflamed tissue. Specific discs with specific frequencies addresses the each specific issue, in this case reducing your body’s stress response.

Click here to know more about how ANF Therapy can help you.
Find an ANF Practitioner near you.