We all may be prone to accidents while doing everyday activities. Some of these incidents can result in cuts, at the very least, bruises, or worst injuries. You may avoid getting injured, but you might also get some bruises as a result of these accidents.

Bruises are described as marks that appear on the skin when tiny blood vessels called capillaries break or burst underneath. On people with light complexions, these patches are usually bluish or purple colored. On darker-skinned people, the patches may be dark purple, brownish, or black colored.

These skin discolorations are caused by the blood from the capillaries leaking into the soft tissue under the skin. More often, bruises feel tender or swollen at first.

Bruises can occur when a person has injured themselves. They are caused by internal bleeding under the skin. Because of each individual’s unique characteristics, some people are naturally more likely to bruise than others.

Consider, for example, older people who may bruise easier compare to younger people since they have thinner skin and the tissue underneath is more delicate.

Bruises not only happen under the skin. In some cases, they can also appear deeper in your tissues, organs, and bones. While the bleeding is not visible, internal bruising can cause:

Bruises often start red because fresh, oxygen-rich blood has newly pooled underneath the skin. At around one or two days, the blood begins to lose oxygen and change color. In normal cases, a bruise that is a few days old will often appear blue, purple, or even black. After about 5–10 days, bruises turn a yellow or green color.

Following the ANF Therapy® session and the application of ANF Discs on the bruised area, pain may reduce faster. Read and see below the before and after results of a patient who experienced bruising and pain due to an accident: 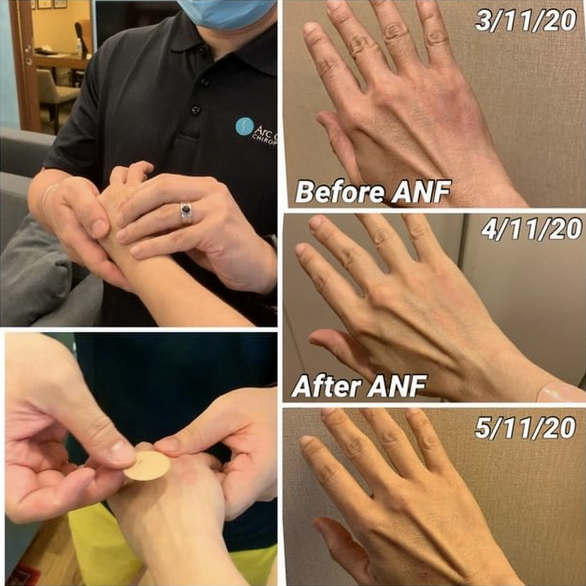 “The patient had her hand slammed hard by an electronic sliding door as it was closing. Besides the bruising, she also had pain on the area of impact, shooting up to her forearm.
With just two ANF discs and a wrist/forearm adjustment, the bruising disappeared within two days, and the pain in her forearm was gone.

ANF does its magic again… Loving it too when patients track their healing process and even make a picture
collage for us to post.”

ANF Therapy® uses circular ANF Discs which are applied directly on the skin after palpation and assessment by a trained ANF Therapist following the ANF Therapy Method, Patented Model no. U202030252, ES1259974.
The ANF Therapy® purpose is alleviation in injury and pain within minutes.
Our aim is that the patient experiences a reduction of pain and swelling, an increase in range of motion, and an improvement in quality of life-related to health. Non-transdermal non-invasive device, NO needles or chemicals are used.

Contact us today so that we can recommend the right ANF therapist for you.

ANF Academy offers access to the FREE Pain Mastery Webinar to all healthcare professionals eager to grow their knowledge and practice!

Take this quiz to find out if you are qualified to join: pain.anfacademy.com